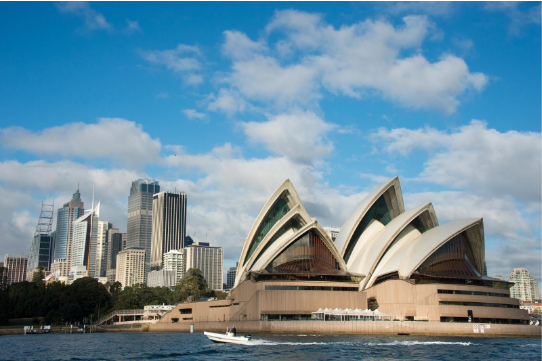 Sydney is the gateway to the wonderful world of Australia. A long 20-hour flight is behind us, we got to a new place and breathed in the invigorating air of an unknown place. Having opened our minds and hearts to bright impressions, we were ready to enjoy the tour.

It was unanimously decided that running chaotically from one monument to another, trying to accommodate the most amazing places in a unit of time, is incredibly stupid. We had to approach the matter in more detail. Having drawn up a detailed plan, which you are also advised to do as well, we optimized the route and began to pass one sight after another. Well, get your notebooks out and be ready to write down the recommendations of experienced travelers. Today, our selection includes the best romantic places in Sydney.

Not sure whether she’s the only one? Open the blog and find a few using tips that will help you choose the right woman to marry.

There’re a lot of parks in Sydney. If you leave the house, turn around the corner, you’ll definitely get into a park. The Australians spend most of their free time in these parks, especially since the weather has it all year round. The park called Cremorne Reserve is located in the heart of the city. It offers breathtaking views of the city skyscrapers, the Sydney Opera House, and the Harbor Bridge. A family vacation or an evening date can be combined with swimming in a public outdoor pool. The entrance to the pool is free and the view is priceless. So don’t forget to bring your swimsuit.

A restaurant where delicious food is rather a nice bonus. The 47th floor of the skyscraper where the restaurant is located offers a stunning view over the whole city. The floor spins allowing you to see the city from all sides and angles. If you want to get a table by the window, it is better to reserve at least a month in advance. But if you want to drink a couple of cocktails in the bar, which occupies the second half of the restaurant, you do not need to reserve anything: the main thing is to arrive immediately after opening.

Visiting Sydney and not going up on the bridge is a shame. The bridge looks great from different parts of the city, but when you climb it, you have a stupendous view over the bay, city, and opera.

However, not everyone manages to climb the bridge: as the visiting hours are scheduled (it is better to reserve in advance). It takes from 1.5 to 3.5 hours to climb up the bridge. All personal belongings, including phones and cameras, are handed over to the storage rooms, so the photos are taken only by the guides and then sold out at the exit. Before climbing, you undergo an alcohol test.

It’s the city’s calling card. Without the photo in its background, you can’t prove to your friends that you really have been to Sydney. Previously there was a military fort on the site of the cultural object, and later there was a tram depot. Inside the building, there are 7 large rooms with a concert hall, opera house, 2 drama halls, a theatre studio, a hall, and a restaurant. You can take a tour of the Sydney Opera House. The opera stages feature both classical works and contemporary creative productions.

Sydney’s most famous tourist area is home to the lion’s share of the city’s attractions. In the central part of the city, there is a pedestrian bridge, which offers a wonderful view of the urban landscape, as if descended from the pages of a novel about the distant future. You can take a ride on a monorail train and visit the Maritime Museum. Film fans will love watching the premiere at IMAX because the cinema boasts the largest screen in the world.

We recommend you to take a leisurely stroll across the bridge and find a bar of your choice and sit on the open terrace with a glass of wine and a view that resembles New York’s Manhattan, but at the same time inspires peace and proves that life isn’t so hasty. And that’s so Australian.

Why are the mountains blue? The unusual optical phenomenon makes the ridge look like a fantastic mirage: due to the passage of sunlight through the evaporation of eucalyptus oil, there is a blueish haze.

For tourists and just anyone who wants to admire these beautiful landscapes, there is a railway – Katumba-Sinik.

Hiking in national parks and the rainforests is perhaps Australia’s favorite pastime. The way to Wedding Cake Rock through the forest and rocks is not the easiest. This sight is a real wonder of nature – the white cake-shaped rock is located in Sydney’s largest national park. It offers an ocean view that’s really fascinating – but on weekends, there’s a chance to meet others who want to be photographed while sitting on a cake.