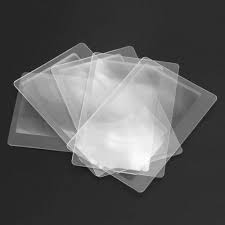 Fresnel magnifier is an ultra-thin magnifier. Made of transparent plexiglass (of course more materials can be used). The minimum thickness of a Fresnel magnifier made of PVC can be between 0.4mm and 0.90mm.

Unlike ordinary magnifiers, its surface is covered with tiny stripes, and its vortex stripes contain many convex lenses (Ring shape for short), so that the light passing through it bends to produce a diffraction phenomenon, thereby forming an enlarged image.

Fresnel lenses are characterized by higher brightness than ordinary lenses, a flat surface, and a large radiating area. Generally, the diameter of the ordinary meniscus lens is very limited, and Fresnel has played a very good role in the field of magnifying glass, achieving an effect that cannot be achieved by ordinary lenses.

And the Fresnel magnifier made now has a thickness of only 0.4mm, and it is portable. In fact, the main function is to reduce the weight and volume of ordinary plexiglass and glass magnifier made by traditional magnifiers.

Compared with traditional lenses, Fresnel lenses have the advantages of large area, light weight, low price, lightness and portability, etc. Therefore, they are characterized by a short focal length, less material consumption and weight smaller volume. Its surface is composed of a series of zigzag grooves, and the central part is an oval arc.

Each groove has a different angle from the adjacent groove. However, the light is concentrated in one place, to form the central focus, which is the focus of the lens. Each groove can be regarded as an independent small lens, which adjusts the light into parallel light or focused light. This lens also eliminates some spherical aberrations

The light enters from one side, passes through the Fresnel lens and comes out on the other side to focus into a point or exit in parallel light. The focus is on the other side of the light and is finitely conjugated.

Fresnel lenses are mostly thin sheets made of plastic materials. They are also made of glass. One side of the lens surface is smooth, and the other side is burned with small to large concentric circles. Its texture is made of light.

The requirements of the lens are very high. A high-quality lens must have a smooth surface and a clear texture. Its thickness varies with the application, mostly around mm thickness and long detection distance.