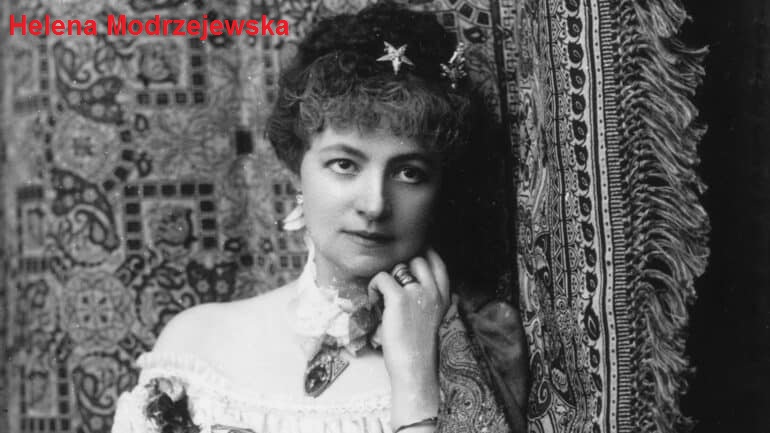 Helena Modrzejewska was one of the most famous Polish actresses who excelled in Shakespearan performances. She was originally from Polland but later migrated to America. In Poland. She was regarded as the country’s greatest actress of all time, while in America, she was known as an American Shakespearean actress. Did you know Helena performed in 260 Shakespearan performances? If you want to know more about this marvelous actress, then be sure to stick around till the end.

Helena Modrzejewska was born on the 12th Of October 1840 in Krakow, Poland. She was known by different names as her original name was Helena Opid, while professionally, she was known as Helena Modjeska. Helena’s brother introduced her to the theatre, and in 1861, she made her first debut in the theatre. Her 46 years of acting career started in Poland and ended in America; that’s why she is known as the Star Of Two Continents. She earned numerous titles in her life and was recognized as Poland’s Brightest Theatre Star.

After her first debut, she changed her name and simplified it to Modjeska to make it easier for the English audience to pronounce it. After this, she appeared in many other plays; in 1865, she tried to be a part of the German Theatre, but she wasn’t successful because of her poor knowledge of the German language. In 1868, Helena appeared in different plays in Warsaw; and kept on appearing in different plays, due to which she was regarded as the Theatre Star.

In 1868, she got married to a Poolish Nobleman named Count Bozenta, with whom she migrated to America in 1876. Both husband and wife changed their names as they were hard to pronounce for the English audience. Helena’s dream was to abandon the theatre and want to enjoy life in California. But she wasn’t meant to enjoy her life as she was new to America and couldn’t speak English very well. So she had to return to the theatre. In 1877 she made her first debut in American in California Theatre. She spent three years in London to improve her English, after which she returned to America and achieved great success in a few years and was counted among some celebrities. She played in nine different Shakespearean plays, having the role of heroine.

In 1902, she returned to Poland to perform different plays and then returned to New York in 1905, where she gave a Jubilee performance. Forty-six years of the acting career of Helena Modjeska ended after two years of this performance.

This Notable actress died in 1909 from Bright’s disease in Newport Beach in California at the age of 68. Her dead body was sent back to her hometown, Krakow, to bury her in the family plot.

Helena Modjeska was a world-famous actor who earned her reputation in two different nations have different languages. She was able to win the attention of the people of both nations in a few years. Though she’s dead but still alive in our memories, even Google Doodle paid homage to Helena Modjeska on the 12th of October 2021 on her 181st anniversary.

Don’t forget to like this video, and if you want to know more about our stars, then hit the Subscribe button.