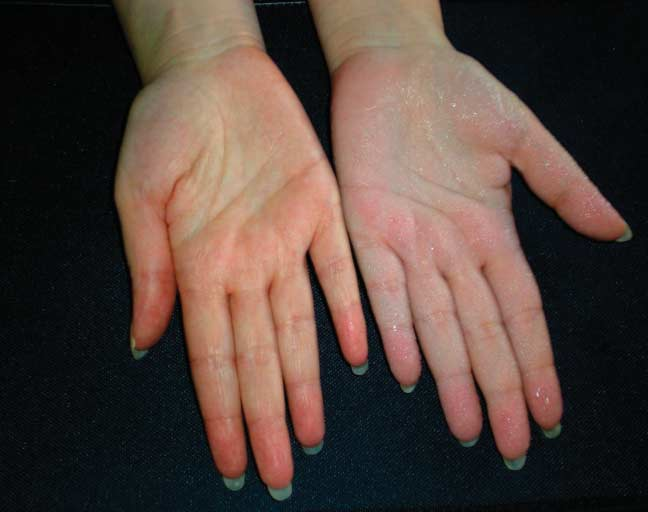 When it comes to the extremes of human body functions, one might think of elite athletes or people with extraordinary physical deformities. However, few would associate this development with something as relatively common as sweating excessively under the arms. While many individuals are likely aware that their sweat can smell particularly bad when they’re nervous or afraid, fewer know that they may also be suffering from a disorder that causes them to sweat excessively and can seriously affect their daily lives. It’s called hyperhidrosis, and the condition affects thousands of people each year. If you have symptoms, you should see an Upper East Side hyperhidrosis specialist for diagnosis and treatment.

Hyperhidrosis is a rare disease in which sufferers often find themselves sweating profusely even during times when they might not normally expect to be sweating. The most common location for hyperhidrosis is the armpit, but it can also affect hands, feet, facial regions, and even the entire body.

There are generally two types of hyperhidrosis: primary and secondary.

Primary hyperhidrosis refers to people who have experienced excessive sweating since childhood or adolescence. This kind of hyperhidrosis, which affects about two percent of the population, is usually inherited.

Secondary hyperhidrosis is caused by factors other than genetics. For example, it can be caused by various diseases or disorders that affect one’s adrenal glands or central nervous system. It can also be triggered in some cases when a person takes certain medications. The symptoms of secondary hyperhidrosis are very similar to those of primary hyperhidrosis, but they tend to disappear once the cause of the disease is resolved.

The exact cause of hyperhidrosis is not yet known. However, the condition often appears in individuals who already have a family history of hyperhidrosis or other disorders affecting their autonomic nervous system and sweat glands. Research has shown that there may be a genetic predisposition for this disorder, but the evidence remains inconclusive.

Many medical conditions can also cause secondary hyperhidrosis. These include the following:

Research has also shown that emotional factors such as stress and anxiety can trigger hyperhidrosis. As a result, it has been suggested that people with hyperhidrosis seek counseling should they find themselves extraordinarily nervous or uncertain about a given situation. However, it is essential to note that emotional causes are not the primary causes of hyperhidrosis.

Primary and secondary hyperhidrosis present similar symptoms, but they also share some critical differences in terms of prognosis and treatment.

Treatments for primary hyperhidrosis include iontophoresis, which involves placing the affected area of skin under a mild electrical current that is discharged by two electrodes. Another option is topical application of aluminum chloride to the skin, usually in an alcohol solution.

To summarize, hyperhidrosis is a rare disease in which sufferers often find themselves sweating profusely even when they might not normally expect to be sweating. The leading cause remains unknown, but it is linked to genetic factors and conditions affecting the autonomic nervous system and sweat glands. Treatments vary depending on the type of hyperhidrosis you have.