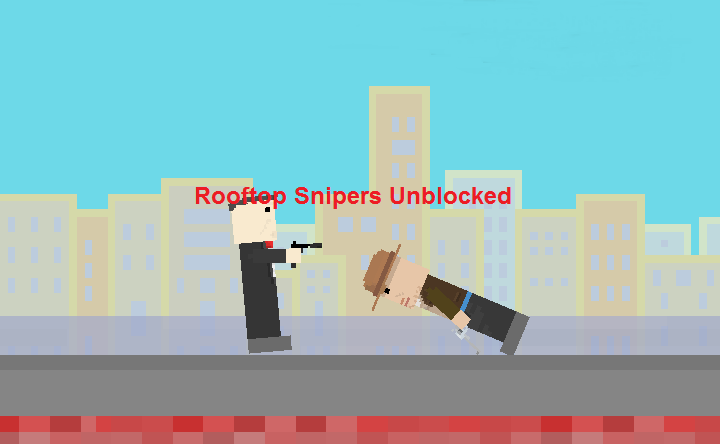 Rooftop snipers Unblocked is a 2D shooter game based on pixelated and retro graphics. The game’s main theme is to shoot your opponent and make him fall from the roof. It is a 2-button game that makes it look easy, but it gets hard from level to upper level when you start playing. The bullet you shot will not directly kill you, but it will push you to the end of the roof. You need to be safe from the bullets and knock the enemy off the roof to win the level.

The main feature of this game is you can invite your friends to play against you. The first option is you can play with a computer bot, and the second option is you can call a friend for this rooftop snipers game. It makes you busy and excited until you win or lose the round. You will be at the edge of your sofa in excitement while playing it with your friends in knocking him off the roof.

Unlike other shooting games, rooftop snipers unblocked is a short-minute round game that ends before you know it. The opponent will shoot quickly to make you fall off the edge. You need to be super active and fast to dodge and shoot and drop him off the roof. Below we have discussed steps on how to play this game and some tips and FAQs that will help you understand the gameplay even better. But first, have a look at the features:

This game was developed by an arcade and funny games developer Michael Eichler in 2017. He has developed many other games, including Tube Jumpers, Getaway shootout, Rooftop snipers 2, and Ping Pong Chaos.

How To Play Rooftop Snipers Unblocked?

The gameplay depends on the option you choose like you want a single-player or want to play with a friend who is a two-player. Both options have different controls, and we have put both below:

As discussed above, you can either play as a single-player or as 2-player with your friend. Your first and final task is shooting the opponent and throwing him down the Rooftop. Your aim must be good, and you have to protect yourself by jumping and dodging. It seems easy, but as you plan for it, your opponent will also try to knock you down, making it more exciting.

We have shared how to play the Rooftop Sniper Unblocked; now it’s time to share some tips. Everything depends on how you play, where you attack (your aim), and how you protect yourself. If you lose focus, you end up dropping down from the Rooftop. You need to control your character leaning, as it will decide your jumping and moving direction.

The second thing to keep in mind, you need to press and hold the key to raise the gun and make an angle. Holding the key will let you know your shooting angle. If your target hits, the opponent will either spin, wound, or knockdown from the roof. So plan accordingly!

Below are some more tips to consider:

What Are The Advantages Of Playing Rooftop Sniper?

It is a quick action game; it improves your reflexes and focuses. You need to be super fast to gain the advantage and throw your opponent quickly. The shooting, jumping, and dodging will positively improve your reflexes, and hence you will master the game.

The second benefit we have seen is it improves your strategy-making skills. Rooftop Sniper 2 unblocked helps you make a good plan by carefully watching enemy steps. Dodging your opponent’s attacks and shooting at him will positively affect your problem-solving ability. At all game levels, you need to focus and solve problems to win the round. Planning your next move according to the opponent’s moves also improves your strategy-making skills.

Last but not least, it improves your speed. As you need to be super active and fast, it makes you fast at your regular work and hence you will be a winner in real life.

Many other games have almost the same gameplay as rooftop snipers unblocked. Some of them are listed below:

s it safe to play this game?

Yes, it is safe to play. It is a fun shooting game where you need to throw your opponent off the roof. You need to act faster to win the rounds.

Can we hack Rooftop Snipers game?

No, we don’t recommend this as it is cheating. You should play a fair game instead of using some cheats. Downloading cheats can affect your system as it contains viruses.

Rooftop Snipers 2 unblocked is for fun-shooting games lovers. It lets you enjoy it with your friends at home. Shooting your opponent fast to knock him down the roof makes it more exciting. With all of the above mentioned features, start playing this duel-player game and win the platform today!