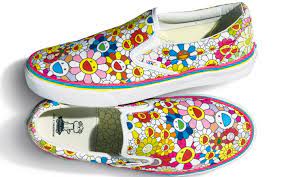 If you’re anything like the rest of us, you’re obsessed with the latest exclusive collaborations from Vans!

You might be surprised to know that Vans is actually a sportswear company. Their shoes were in fact originally designed to be worn by skaters, snowboarders and other extreme sports lovers. But Vans actually has an incredible rich history and this beloved shoe has been worn by, well, just about everybody!

It’s this rich history that has pushed Vans to form so many awesome collaborations with designers, musicians and other artists. From the Beatles Yellow Submarine Collection to an exclusive collection with Marc Jacobs, there’s a Vans collab out there to suit every taste and every budget.

Check out our guide to learn about the 5 best Vans collaborations of all time. In the past 50 years Vans has come out with some pretty fantastics styles but we’ve narrowed it down to the absolute 5 gotta-have-them pairs.

Remember, if you’re in the market for your own exclusive pair of Vans, don’t forget to grab a coupon code! The latest Vans collaborations can get pricey, but Journeys coupons are here to help you save on a number of exclusive styles. The best part? All the coupons are free to use, so shop with one or enjoy them all!

The 5 Best Vans Collaborations of All Time

In the 1980s, Vans did an awesome collaboration with everyone’s favorite mouse. The Vans x Disney collaboration created a retro shoe collection featuring everything we loved about the 80s: bright colors, bold patterns and Disney inspired prints. Original shoes from the collection have become so popular and hard to find they’re considered “holy grails” amongst the sneaker fanatic community.

Considering the massive popularity of the Beatles, often considered to be the most influential rock band of all time, it was only a matter of time before Vans honored them with their own exclusive collaboration. Just in time for the 50th anniversary of the Beatles’ appearance on the Ed Sullivan show, this colorful collab features original Beatles artwork, drawings and even their faces.

Kenzo is a luxury, French fashion brand founded by Kenzo Takada in the 1970s. The brand is known for their bold styles and both European and Asian influences. Since Takada was a longtime Vans fan he was eager to work on a collaboration. This collab was one of Vans biggest successes with styles featuring all the usual bold prints found on Kenzo clothing. Over 29 styles were created and released over 4 seasons.

In 2014, just before the Force Awakens was released in 2015, Vans collaborated to create the highly anticipated Star Wars collection. The shoes were the classic Vans designed with a modern twist including everyone’s favorite characters from Star Wars. Star Troopers, Jedis, Yoda and other favorites were displayed on each shoe in bright and bold colors.

Now you can finally rock your favorite paintings on your feet! Inspired by the beautiful works of artist Vincet Van Gogh, this collaboration with The Netherlands’ Van Gogh Museum produced shoes so gorgeous so you want to get them dirty wearing them! Each pair is artfully designed and features one of the painter’s most celebrated portraits. The collection was made available worldwide in 2018 and you can still purchase your own pair.