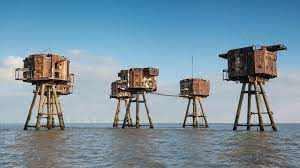 Sealand, built originally in 1942 as HM Fort Roughs, is now the smallest country in the world. Roughs Tower, an offshore platform in the North Sea, is claimed by the Principality of Sealand.

The islands that make up this small country were constructed as fortifications by the British during World War II. Some of them were even constructed on international seas, which is against the law.

Most of the time, Sealand sits silently as a symbol of independence. And some other times, people pay short visits to it while some even short music videos there.

Sealand has produced football teams, passports, flags, currencies, anthems, etc. It is truly a remarkable feature of the Earth’s geography. It is 12 kilometers offshore. You can see it up close with the help of a boat. This country is a ruined-looking platform with a few container-style structures thrown on top.

Several different government factions have tried and failed to capture this platform by force at least 6 times now. Even though no nation has legally recognized Sealand as a country, its independence is difficult to contest. It is a sovereign nation with a long and interesting history.

Fort Roughs Tower, built in the 1940s, was one of the Maunsell Forts built by the United Kingdom to protect the local estuaries’ crucial trade channels. This fortification was located about 7 nautical miles from the coast. Around 150 to 300 members of the Royal Navy used to call it home. The last permanent residents left in 1956. The Maunsell Forts was taken out of service in the 1950s.

In 1978, a German lawyer assaulted the sea fort on Sealand with German and Dutch mercenaries and seized Roy Bates’ son Michael captive, claiming to be the Prime Minister of Sealand. Not long after, Bates recaptured the tower and managed to remove Achenbach and the mercenaries.

In the 1990s, a Russian-organized criminal group used Sealand passports to launder drug money. This cast a shadow on the country. Because of this, the government revoked all 22 passports issued to the Royal family of Sealand.

Even though the operation’s masterminds were located in Madrid, they had connections to German organizations. This included the exiled Sealand Government led by rebel leader Alexander Achenbach. They managed to sell 4,000 counterfeit Sealandic passports to Hong Kong citizens.

In 1967, Paddy Roy Bates ruled over Sealand. He took it back from the pirate radio stations and proclaimed it an independent nation. But it has been operating for the last 54 years against the opposition of the British government.

Although no other country recognizes it as a sovereign entity, it has just become the smallest country in the world. To visit, you’ll need your passport as the British government never bothered to legally claim it. Sealand is technically part of British territory now due to a 12 mi extension implemented in 1987, although the island remains fiercely independent. Roy Bates proclaimed himself the Prince of Sealand in October 2012.

Sealand is only a quarter of a kilometer in size. People also often use the name “Rough Fort” to describe this abandoned fort. Due to its small size, Sealand can be a little hard to locate on any map, be it online or offline. Many rules and regulations do not apply to the country overall because the international community has yet to acknowledge Sealand officially. This is why when you search for the smallest country in the world, Vatican City will show up in the results instead of Sealand.

Since Sealand is not a recognized nation, it can’t compete in international sports. However, that has not stopped its citizens from forming sports teams and rooting for other teams throughout the world. One such team is a football squad that competed for the first time in 2004 against the football team from Aland Islands.

In 2007, a citizen of the Principality of Sealand named Michael Martelle flew the flag at the Word Cup in Quebec City. Mountaineer Kenton Cool planted a flag of Sealand atop Mount Everest in May 2013.

Sealand is the world’s smallest country and sovereign state. It is also a symbol of independence and freedom. There has never been a covid 19 case in Sealand. It is the only country in the world with no covid 19 cases whatsoever. This is a remarkable feat.

One of the most impressive things about this country is that its citizens may now use their country’s passport to visit sixty different nations around the globe. It is one of the most unique attractions in the world.