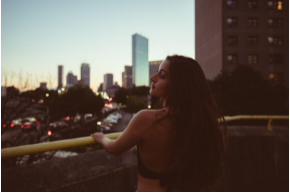 Never heard of the term “karmic relationship?” You’re not alone! Simply put, a karmic relationship is a passionate relationship that is full of turbulence. In a sense, they are related to karma because they are considered relationships we need in order to grow and learn. They test us and bring us to our limits, consisting of the highest highs and the lowest lows.

Karmic relationships usually involve very intense feelings, so much so that people often think they’ve found their soulmate. Unfortunately, that’s not the case, as they are not meant to be and typically short-lived. They are emotionally exhausting and can end just as quickly as they begin.

The “spark” is instant! When you’re in a karmic relationship, you’re drawn to each other immediately, often feeling like you’ve found love at first sight. You instantly bond and have things in common because you’re being drawn together through karmic energy.

Karmic relationships are full of drama and emotions. This usually leads to a break-up and make-up cycle, which is incredibly unhealthy. While drama is inevitable in any relationship, the healthy ones keep it to a minimum. In karmic relationships, the drama feels constant and relentless.

Whether it’s the instant connection or drama you’re drawn to, karmic relationships can be quite addicting. You and your partner were connected to each other for a reason, and it keeps you there even when you recognize it’s unhealthy.

4. Lots of Highs and Lows

All of the drama leads to a lot of highs and even more lows. Since you’re not truly compatible with each other, the highs eventually peak, and the low points are filled with a lot of fighting and breaking up. On a positive note, the highs teach you a lot about yourself and what you need in a relationship moving forward.

Karmic relationships often facilitate codependency, which is a big sign of an unhealthy relationship. When this happens, you lose your sense of self and look to your partner for all of your decisions. You’re spending every moment together and relying on each other for anything and everything, which inevitably leads to problems.

6. Brings Out the Worst in You

In a healthy relationship, you lift each other up and become better versions of yourselves. In karmic relationships, the worst parts of you come out, usually due to fear of losing what you have. This can cause jealousy, possessiveness, and other toxic feelings and qualities.

Because of all the highs and lows, people never feel completely settled in karmic relationships. In a healthy relationship, you get to know each other better and become comfortable, slowly letting your guard down. On the other hand, karmic relationships constantly make you feel on edge and on the defense, waiting for something to go wrong.

8. Fearful of How It Ends

Because of so many mismatched behaviors and expectations, you have the same fights over and over again. Your incompatibility is too much to handle, which again leads to a make-up and break-up cycle.

Karmic relationships are emotionally, mentally, and physically exhausting. The constant drama, fighting, and uneasiness can take a toll on your body, causing you to feel completely worn out. Relationship stress is hard on anyone, and karmic relationships bring it to the next level.

The biggest sign of a karmic relationship? It doesn’t last. These relationships are not the real deal and are not meant for the long term. No matter how hard you try to keep the relationship above water, it’s just not meant to be. Think of it not as a loss, but as a learning experience to help you grow and mature.

If you believe you’re in a karmic relationship, the best thing you can do is end it. They are not meant to last forever, and that’s okay—you’ll come out of it stronger, happier, and ready for the real thing.