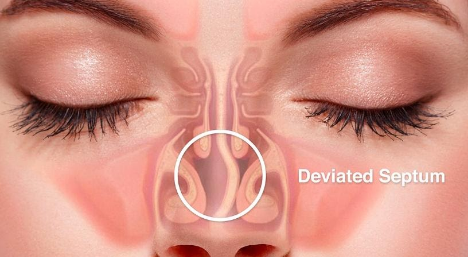 Breathing without any hassle is a blessing of God as he creates us with love. Many people have a breathing problem due to Allergies, Asthma, Inflammation, Sinus, or Deviated Septum. You must hear about the Deviated Septum that is common for breathing problems. American Academy of Otolaryngology-Head and Neck Surgery estimates that up to 80% of the population has a deviated nasal septum.

What is deviated septum?

In our nose, there is a nasal septum. This septum works as a wall between two side of the nose. The septum is not a bone; instead, it’s made of cartilage. The duty of this septum is to supply blood vessels and is covered with skin. Ultimately, the septum would be in the middle of the nose.

It ensures the equal size of the right and left sides. In more than one-third of the population, the nasal septum is out of the center, and we don’t notice it yet. The decentralization of the nasal septum is called Deviated Septum. People who have Nasal Septum on one side of the nose are more comprehensive than the other one.

According to Relaxsonia, There are many products available that are used to treat Deviated Septum in a natural way. You will find many types of oil which work as home remedies for Deviated Septum. Relaxsonia Suggests some supplements for this problem along with Vitamin C, Vitamin D, Magnesium and Calcium, and Apple Cider Vinegar.

Due to the unfavorable shape of your nasal septum, nasal congestion happens. For the narrowness of the nasal holes, the airways get blocked. For that reason, your breathing in one nostril has stopped. Sometimes nasal congestion also happens for allergies too.

Sinus is responsible for generating mucus. That mucus saves it from dust, moisturizes it, and defends it from poisonous organisms. Deviated septum has the interface to drainage capability of sinuses. If you face too many sinus problems in a year, it’s maybe for your Deviated Septum.

The mucus is an essential part of functioning your nose correctly. If you have a sinus problem for Deviated Septum and its affects drainage, things get complicated. This is the reason for Postnasal Drip. Your nose and throat may be affected by Postnasal Drip.

For the decentralization of your nasal septum when you are sleeping you may produce a noisy sound. Due to the blockage or narrowness of one side of the nose, the air may disturb the nasal tissue and produce noisy sound. Making a noisy sound while sleeping is considered a symptom of Deviated Septum.

Sneezing is a natural issue. It causes dust, particles, animal dander, and pollen.  If it reaches a serious level and you are sneezing frequently for the day and night you may consult a doctor. Sneezing continuously is another symptom of Deviated Septum.

What problems can a deviated septum cause?

Deviated Septum is not considered as a disease rather it is considered a displacement of Nasal Septum. For the decentralization of this septum, people face tremendous breathing problems sometimes. The major problem can deviated septum cause are include:

Difficulty  of Breathing Through Nose

The difficulty of Breathing is the most noticeable symptom of Deviated Septum. Do you face any problem while breathing, or does it make any sound? Do you feel any complexity with your lungs while breathing? You can examine it by yourself if you notice it deeply while breathing. Since the nasal; septum is not in the center, the narrower hole of your nose cannot supply many airways that are needed for proper breathing.

Sound Breathing is essential for a sound sleep. If you face breathing while sleeping, your body doesn’t get enough oxygen to repair itself. It may cause sleep disturbance. Deviated Septum makes an obligation in breathing. The blockage in the air makes breathing imperfect. This leads you to a sudden awakening from sleep. Due to Deviated Septum, you can’t sleep for a long time at night, the frequent disturbance of sleep hampers your night sleep.

Headaches have a relation with sound breathing. If you face any breathing problems for a long time this may cause your headaches. For the disturbance of airways, the air doesn’t frequently flow on your nose, which creates pressure on the nose area. If you have Deviated Septum, you must feel that complexity if it goes on a deep level. This leads you to severe headaches.

The problem of Deviated Septum often leads you to snore. Because of improper breathing and nasal congestion, snoring has happened. In that case, the breathing problem became a severe problem. If you feel Deviated Septum for a long time it may cause your sleep apnea. The main symptom of sleep apnea is snoring while you are sleeping.

There is a link between Deviated Septum and Asthma. In that case, the nasal congestion works as a bridge. Deviated Septum is the cause of the obstructed nasal passageway and sinus infection. The point is this chronic inflammation of the airways directly causes Asthma. Studies have found that people who have sinus and deviated septum disease are riskier to face Asthma problems.

As we said earlier, in most cases Deviated Septum has no symptoms. If your problem hit on a serious level then you might notice the above symptoms. The treatment of Deviated Septum is available. It can be fixed by surgery and in a natural way. The cost of this surgery is $6000 to $30000.

Before your problem goes to a severe level you should appoint a doctor. The doctor might tell you to prepare yourself for surgery. If the patient is male and below 15 years the doctor might tell them to do the surgery after some years. Besides, women’s cartilage matures before 15 years.