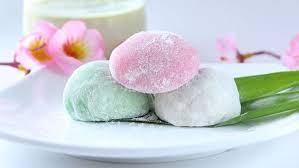 Japan is known for so many things. Their culture strives for excellence in just about everything they do. From the samurai warrior tradition to excelling in technology, the Japanese strive to be the best at what they dedicate their lives to. This is no different when it comes to food. While the Japanese aren’t exactly known for their sweets—they don’t use much dairy either—if you investigate it, you can find some awesome desserts. Below are the treats that you must try when you’re in Japan.

One of the things that the Japanese excel in is bakery. As it turns out, Japanese bread is sweet. When they eat bread, it seems to be a dessert item. Sweet breads come in all forms. You can even find chocolate bread, red bean bread, and fruit bread. The muffins are plain, but sweet and delicious. Wherever you are in Japan, you should be able to find a bakery that has some amazing bread—soft and fluffy. Japanese bread is some of the tastiest in the world.

Mochi is a concentrated glutinous rice that is made into truffle-like candies or used as a flavoring. & Mochi ice cream is very popular. You can eat mochi on its own, but it has become one of the go-to options for all kinds of sweet treats. You name the dessert, there is likely a mochi alternative. It is a light, delicate flavor that is sweet but not overpowering.

If you’re in Japan, you must try mochi. However, you don’t need to travel all the way to Asia to get a taste of this sweet. Go to your local Japanese market, neighborhood, or bakery, you should be able to find mochi delicacies.

Daifuku uses mochi to make a small round rice cake with filling. Bean paste or green tea are popular options, but in Osaka strawberries are the most popular.Ichigodaifuku is one of the most beloved sweets not just in Osaka, but around Japan. With daifuku, the star of the show isn’t the mochi. It is the filling, and you can fill it with just about anything! When you’re in Japan, don’t forget to try this tasty treat.

Another great sweet is known as the Tokyo banana. These treats aren’t bananas, but soft cakes filled with custard cream. They look like bananas but are often colored to look like fun designs. Animal prints and flowers are popular. It’s kind of like a French éclair, Japanese style. They are one of the greatest treats you can find in Japan. When you are traveling in this country, you should try one of these banana-shaped treats.

Red bean paste is everywhere in Japan. It is commonly used in sweets and bakery items. Red bean buns are tasty, although the bun originates from China. There is, of course, red bean daifuku. There are red bean pancakes. & red bean candies. The paste can be used in just about anything, and it is a popular dessert whether you are living in Japan or are trying some treats at your local market.

Like a lot of Japanese sweets, Taro is a root vegetable that can be used in several ways. Taro is kind of like purple yam or sweet potato. When crushed down or combined with sugar and gelatin, taro is a tasty ingredient for all kinds of desserts. Taro ice cream is popular. So are taro cakes. You can make pudding from taro. You can make daifuku with taro. And You can add coconut milk or spices like cardamom. Whatever you’re in the mood for, taro has a dessert for you.

If you haven’t noticed there isn’t as much chocolate, caramel, peanut butter, and other ingredients commonly found in Western desserts.The gift of chocolates doesn’t quite take on the same meaning as it does in Canada, France, or the United States. Instead, other ingredients are used to make sweet treats. Whether it’s mochi, red bean, taro, or just some sweet bread, Japan has many sweets to try. When you’re going to Japan, you will have many experiences that include interesting tastes. Be sure to try Japanese sweets!