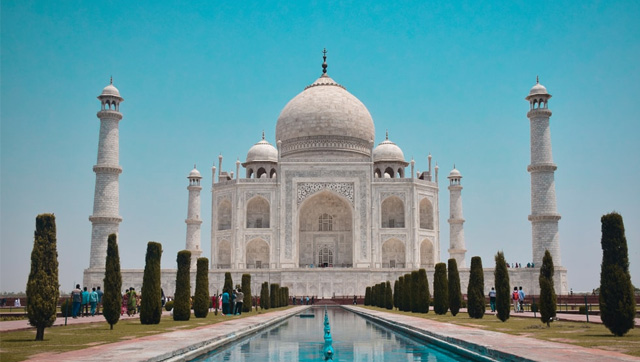 Elaborating frequently book Gatimaan tour by most of the travellers visiting Agra. The tour plan of Delhi Agra Train Trip by Gatimaan Express Train. The train tour begin with our car transfering you from Delhi hotel to Nizamuddin Railway station in Delhi for boarding train Gatimaan Express for Agra. Our company driver will provide you assistance at railway station in locating plateform for the train & also assist you in boarding train. Disembarking from train at Agra Cantt Railway station where our local

Taj Mahal tour guide & chauffeur will be waiting you bearing ply card of your name. After welcome & meeting assistance in Agra straight away you will be taken to Taj Mahal for guided sightseeing. After Taj mahal , the same tour guide for Agra will accompany you to Agra Fort in same car. After Agra Fort you can go any descent Restaurant or 5 star hotel for lunch.

After lunch you may proceed to last monument of this tour – Baby Taj Mahal. At the end you will get chance to visit marble inlay factory where your Taj Mahal tour guide will bebriefing you with premitive tools used by craftsmen for construction of Taj Mahal with exact skill involved in it.

Also you can see marble souvenir & artefact which is also centre of attraction among tourist who love handicrafts. Finally you will be transferred to Agra railway station for catching gatimaan express train for Delhi. Your taj mahal tour guide will assist you in embarking at railway station. You will be served dinner of your choice either vegetarian or non vegetarian in moving train which is the special feature of Delhi Agra Train tour packages.

Once you arrive back to railway station in New Delhi , the same morning chauffeur will transfer you back to your hotel in Delhi. With this day tour by train Gatimaan express end with everlasting memory of Taj Mahal Tour by train.

Why  gatimaan train tour is known as luxury or premium tour for tourist ?

Once the Gatimaan train move, you will be served breakfast in morning & supper in evening by train hostesses like airhostesses in flight of your choice either vegetarian & non vegetarian . Both vegetarian and non-vegetarian meals are available in different variations. You will be given mineral water bottle & beverages like Tea, Coffee or lemon soda in moving train.

The catering staff are highly trained & have ability to comprehend every issue through perspective of guests. Foreigner can blind trust high quality hygiene for food served in train. While booking train ticket of Gatimaan express , the traveller can opt its food preference – veg or non veg.

Most of the foreign tourist access Agra From New Delhi because it has International as well as domestic Air embarkation points. In past travellers has no other option to access Agra from Delhi except by surface route because there were no fastest trains which operate  from Delhi on daily frequency – Agra – Delhi same day.

So our federal government took aggressive initiative to start tourist centric trains from national capital to Agra there by promoting Delhi Agra Day Trip By Train. The city of Taj Mahal , Agra has shone as an prominent embarkation point for traveller due to global marketing of Taj Mahal by union government of India through digital campaign promoting incredible India.

Why travellers first choice is gatimaan express over other trains ?

Traveller can use other trains for tour package Delhi Agra Day train trip but Gatimaan Train Tour package is opted because of less time duration by train between Delhi & Agra. Gatimaan Express Train is fully air conditioned & has much high standard than Indian rail coaches. Gatimaan Express train has speed of 99 mph due to this it is indispensable for Delhi Agra same day train tour.

For travellers who prefer to book Delhi Agra same day tour by Gatimaan Express Train, we would like to intimate timing of the train which leave Delhi (Nizamuddin Railway Station) by 6:50 AM & arrive Agra railway station by 8:10 am, the same train leave Agra Railway Station by 5:50 PM & arrive back Delhi