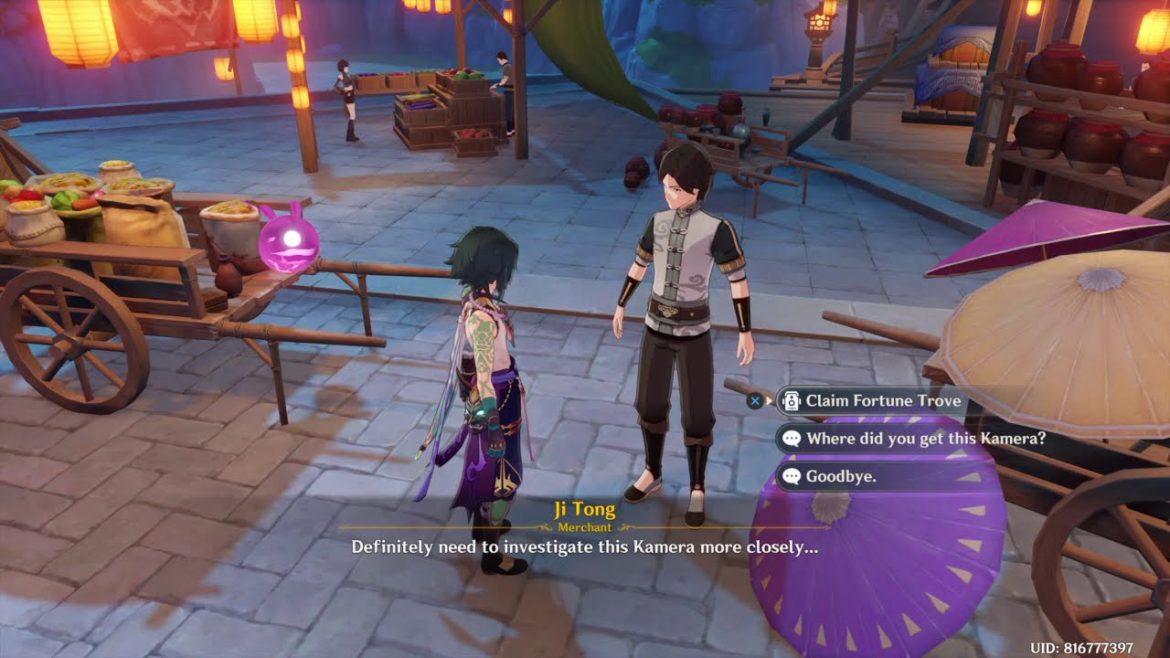 Who doesn’t enjoy events that spice up the game and bring with them a chance to get amazing rewards?Genshin Impact with a recent update has come up with the Five Flushes of Fortune. This event is the complete package as you roam around the map, clicking pictures and win rewards that will boost your game.

Through the event, you can get your hands on Fortune Trove and various prizes such as free Hero’s wit, Primogems, Mystic enhancement ores, and Mora. Players should collect the five colors and then Fortune Trove is claimed from Ji Tong, in order for completion of the event. Get every Genshin Impact Royal Bow like a pro.

This is one of the recent events added to the game to make it much more interesting. In this event, players will be given a Kurious Kamera via which they have to click pictures. This Kamera is no ordinary camera as it changes the colors of pictures. It also lacks a button for capturing which means you have to roam around showing it things and it will capture the one it likes. Each day in this event is exciting and so are the rewards that come with it. So hang tight and continue to read.

How to get the Kurious Kamera?

The journey of collecting the right photographs and getting the fortune trove starts by you travelling to Liyue to speak to none other than Ji Tong who will be at the harbor. He will give you a Kurious Kamera which is faulty to click five pictures of different colors. This kameradoesnt seem to get the color of the picture right. Once you have been given the kamera, open yoir bag and equip it to proceed further on in the event.

Every day of the event, players are given a new color to capture. On the first day, it is red.Players are challenged to capture the Red item as well as collect five distinct colors, on the first day. The items might be different things, like Flaming flower stamen, Silk flower, Valberry, JueyunChilli, and Windwheel aster. You can find the items on the map in the Genshin impact. You can capture one object at a time, although you can capture the same type of items many times. Here are the Genshin Impact Crimson Agate Locations.

Players will be given ten films, every day that means they can capture ten pictures to collect colors each day via Kurious Kamera. If they capture the red item, they get a photograph of a random color. However, kamera can be used to zoom ou, zoom in and even change the angle to get the picture of the target perfectly. The five colors of film are: Pale Gold (yellow), Purple Aster (purple), Ocher (brown), Ultramarine (blue), and Crimson (red), which should be collected so that they can claim a ‘Fortune Trove’, from Ji Tong.

First Five Days of the Task

During the first day of the task you have to look for red objects. On the second day, look around for blue creatures such as hydro slimes and cyroregisvine to capture. This day can be tiresome and really trick. Then on the third day, look out for blue objects to take pictures of As you reach the fourth day, the event requires players to look out for brown creatures. On the fifth day, you have to collect pictures of yellow objects

After Five Days of the Task

On the sixth day, players have to look around for purple objects as their muse.If you want to find the ten red objects then an easy way for it is teleporting to Statue of seven, near the Dawn Winery and Windrise. More than 10 Qindwheel asters are located in the proximity of this statue.

In this ten day event, the total amount of Fortune Trove that might be claimed is eight. Players go about taking ten photos each day during the first week, which is Seven days. In the last three days, they cannot take pictures as it is not possible so they have to trade the pictures with other people who are playing, to get the color that is required.

Players may take photos of the flowers in order to collect various colors in the Genshin Impact. After using the ten films, the players must teleport to Liyue harbor where they find Ji Tong and give him the five colors so that they can exchange it for Fortune Trove. This gives rewards like 120000 Mora, 60 Primogems, 12 X Hero’s wit, and 24 X Mystic enhancement ores. These rewards make the entire process worthwhile.

“Perfect Shot” How to complete this Quest?

Players can store almost 50 pictures of the same color that are not claimed. The game deletes the first color form their inventory if the amount exceeds.

Finally, once five flushes of fortune ends, go and have a conversation with Ji Tong to complete a world quest referred to as “Perfect Shot”. This will help you earn a special kamera, which can be used to capture pictures with beautiful and special colors.

Hope you enjoyed reading the game walkthrough of Genshin Impact Fortune Trove. We have decided to post about the Ghost of Tsushima on PS5- PlayStation 5 Walkthrough which will be posted in next upcoming articles.

A quick little guide to hacking into battlefield 2042

Looking To Buy A Home? Here’s A Checklist of Things You Must Ensure Beforehand

How Connectivity is Driving the Future of the Car