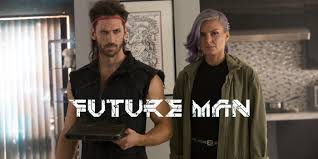 revealing the final season of the comedy series.

The show picks up where Season 2 left off,

as Josh, Tiger, and Wolf are now fugitives from a future world

which resembles The Hunger Games,

trying desperately to evade capture while

clearing their names and fixing the big mess of

the history they’ve made along the way.

played by a character played by Seth Rogen who serves as

an executive producer on the show.

This article will focus on Future Man Season 3 where the

Trailer Reveals Final Season Of Hulu Comedy Series and What Can the Fans Expect.

Future Man never really got the hype as it should have,

which is a shame.

unshaken of blowing up its universe to find more interesting storytelling ideas.

It appears as though that Season 3 will continue the time-traveling,

where the time travelers will probably do more harm to the timeline.

Josh, Tiger, and Wolf end the  Future Man season 2 being arrested by

and are punished accordingly.