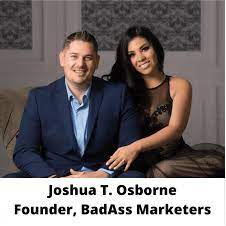 Serial-Entrepreneur Josh Osborne is known for his role as a business owner, coach, motivational speaker, and CEO of Unified Growth, Inc. Founder of the marketing educational platform, BAM University—the first subsidiary of Unified Growth—Josh has been coaching students about how to build their own agencies since the platform launched in 2018. Since then, he has impacted the lives of over 2,000 students, hundreds of whom have gone on to develop six and seven figure business empires using his advice and strategies.

A prolific businessperson, Josh has been the founder of many ventures in his lifetime, but also currently runs Mr. and Mrs. Leads a company that is passionate about helping local businesses grow by providing SEO, social media, and lead generation services that launch small businesses into dominant digital marketers.

Whether working with small businesses through Mr. and Mrs. Leads or educating the next generation of groundbreaking entrepreneurs through BAM, Josh’s goal remains consistent. “In every venture, I dedicate myself to student success, and I teach my students to earn income by helping others. My companies are rooted in the ‘giver’s gain’ principle of giving back to grow oneself,” says Josh.

But how did he arrive at his success?

As a role model for financial freedom and an icon of business-empire-development, Josh’s story is compelling to many, and the generosity he demonstrates with his knowledge is unique. Josh wasn’t born into success; growing up in extreme poverty and living in a trailer park until age nine, it is his appreciation for all he has achieved that inspires him to pass on his lessons to others.

“I didn’t always follow a straight or successful path. Early in life I was a troubled and rebellious child who had several run-ins with the law and actually spent time in prison.” Upon his release, he took initiative to make major changes in his life, marking the launch of his subsequent business ventures. First, he started a moving company from the ground up, growing it to be the largest one in the state of Colorado. Following that, he built a seven-figure roofing company, eventually taking what he learned in these endeavors and applying them to the companies he still runs to this day.

“As a kid, I was always getting in trouble for being unable to sit still and do as I was told. This drove people to believe that I was never going to amount to anything in life because I wasn’t following the rules. But eventually, it became obvious that this urge to move and create that I had in me was the seed for the entrepreneurial career that I have achieved success in today.”

Josh’s coaching programs have a demonstrated track record for producing thousands of students who run their own digital marketing agencies today. Always accepting more clients to join his movement, Josh seeks to make an impact on as many lives as he can.

To learn more about Joshua and his programs, visit his website, BAM university, and Mr. and Mrs. Leads.