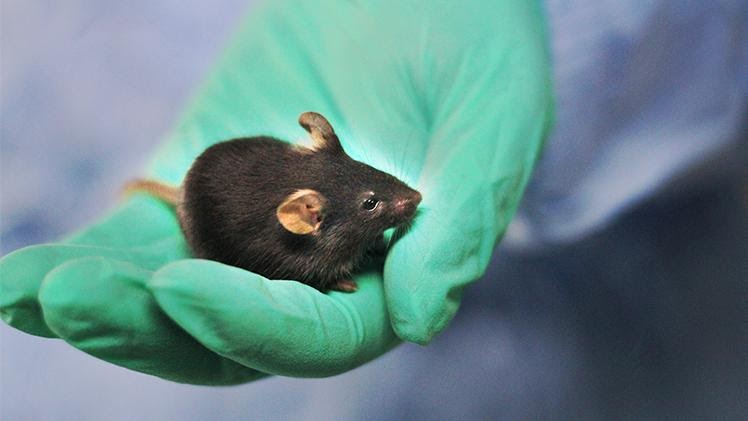 A conditional knockout mouse is an advanced animal model in which researchers have inactivated or “knocked out” genes at specific times and/or tissues. With this technology, scientists can knockout (KO) genes at specific stages and accelerate research with insights into human and mouse genomes and develop better strategies for diagnosing, treating, and preventing human disease.

What is a Conditional Knockout Mouse?

Conditional knockout (cKO) mice are made by inactivating genes in targeted cell lines, tissues, and/or at specific times. In the Cre-Lox cKO model development strategy, one or more critical exons of the target gene are flanked by LoxP sequences – known as the floxed gene – which can be recognized by Cre recombinase. By crossing floxed mice with tissue-specific Cre-expressing mice (Cre deleter strain), it is possible to delete the floxed region and inactivate the gene in desired tissues, while the target gene remains functional in all other tissues – producing cKO mice.

Genes in embryonic stem cells are targeted to generate mouse mutants for in vivo study of any gene. For studying inherited diseases, selectable markers were added to disrupt specific genes in the germline to inactivate the gene’s function. For the same reasons, knockout mouse models have often served as the best in vivo model to study inherited disease.

However, due to the ~30% lethality rate at the postnatal or embryonic stage, these knockout models were not favorable in all cases. Thus, the conditional knockout (cKO) mouse was developed to overcome the shortcomings of knockout mice; cKO models are often referred to as “floxed” models due to the predominant use of the Cre-Lox system in their development.

The use of Cre recombinase and its recognition sites loxP has greatly improved the efficiency and specificity ingenerating conditional knockout (cKO) mice.

How to Make Conditional Knockout Mouse?

Cre recombinase expression system is added to specific cell lines, and the loxP recombination site helps in producing conditional knockouts. The P1 phage is the source of DNA recombinase Cre, a site-specific enzyme that recognizes loxP sites, which are 34 base pair sequences. The Cre enzyme is suitable because no cofactors are required to recombine loxP sites, and embryonic stem cells can be modified by the Cre-loxP system at 37°C.

The composition of loxP is carried out so that it contains two inverted repeats of 13 base pairs, separated by an inner spacer sequence, which is about eight base pairs in length. Reciprocal exchange of DNA occurs between loxP sites when Cre recombinase mediates the process. The recombination of Cre with loxP sites results in the cutting of DNA segment with flanking loxP sites, and a circular molecule is formed having a single loxP site at each end.

(Figure 1 represents loxP sites with a triangle and DNA with a square. Upon the action of Cre recombinase, deletion of DNA segment flanked by loxP site occurs.)

LoxP sites are inserted into introns with at least one exon or more and a promoter region. Then the loxP modified mouse will be bred with another mouse strain with the Cre expression system insertion. The new generation contains a Cre-loxP mediation system, and Cre recombinase expression causes the excision of the loxP site, thereby leaving one loxP site behind and inactivating the target gene. With the excision of loxP sites, flanking exons are spliced, and genes become non-functional because the essential domain is lost with the excision of the exon and/or shifted open reading frame.

(Figure 2 represents a Cre recombinase inserted transgenic strain and a floxed strain with inserted loxP sites into the target gene.)

The first object: The intron regions of target genes must be inserted with the loxP site, and these introns must have at least one flanking exon. Thus, when Cre recombinase excises loxP sites, the gene function must be disrupted.

The second objective: While adding the loxP sites into target genes, gene function mustn’t be disturbed with loxP addition – e.g., the reading frame should be maintained.

To help ensure the desired model outcome is achieved, a variety of objectives need to be considered when developing a conditional mutagenesis model generation strategy.
Cyagen is a world-renowned provider of conditional knockout mouse and rat model development services. Our extensive services are of the highest standard and provide users with a satisfying, efficient experience. Cyagen offers fully customized and flexible options – from transgenic/gene targeting strategy design to model development, breeding, cryopreservation, and phenotype analysis – we can provide all the services you need to develop your research models.