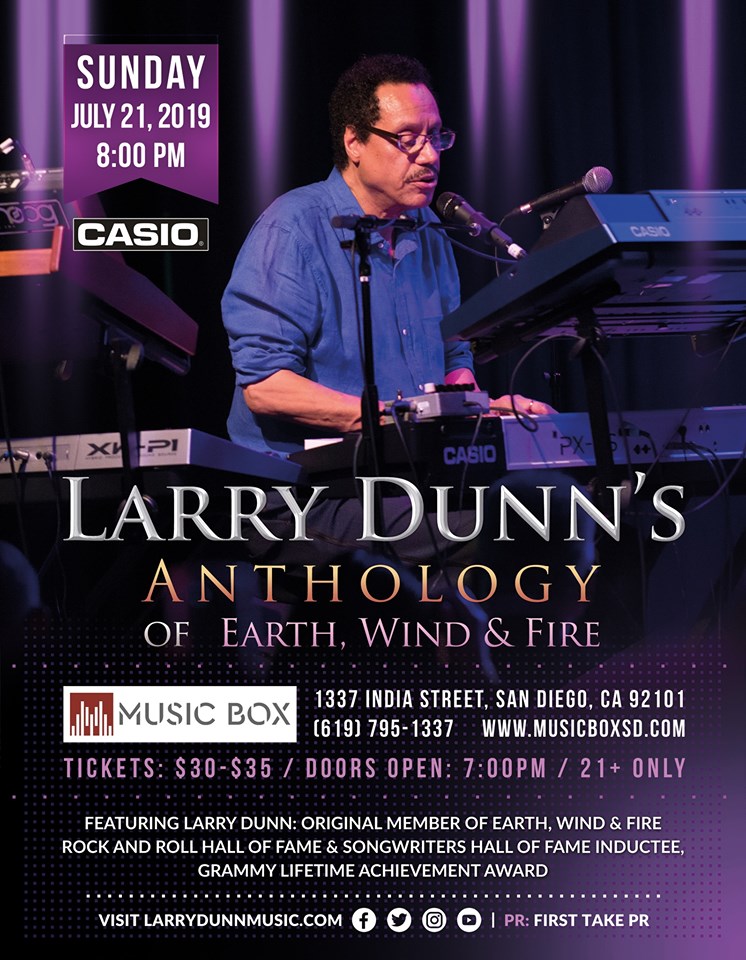 On Sunday, July 21, 2019, Larry Dunn’s Anthology of Earth, Wind & Fire will be performing at the Music Box in San Diego.  This concert is celebrating the recent news of Earth, Wind & Fire’s forthcoming honor at the Kennedy Center (Kennedy Center Honors) in December 2019.  Larry joined Earth, Wind and Fire in 1971 at the age of 18, wrote many of their great songs, including their only Number 1 Pop hit “Shining Star.”  In 1975 on May 24th at 21 years old, together Larry Dunn and Maurice White did the powerful arrangement on the Beatles tune “Got to Get You Into My Life” for the film Sergeant Pepper’s Lonely Hearts Club Band; Earth, Wind & Fire appeared in the movie and performed the song. Larry was instrumental in creating the title tracks for the albums Spirit, the double album Faces, and many more. Dunn assumed the position of musical director at the age of 21! At the same time, while performing, writing, and touring with the group, Dunn also took time out to begin a long journey, and still to this day is producing and writing for many other great artists such as Ramsey Lewis, Luisa Dunn, Hilliard Wilson, level 42, Ronnie Laws, Bunny Brunel, Hubert Laws, Kaylene Peoples, DJ Cassidy, Mary J. Blige, Stanley Turrentine, Lenny White, Phillip Guillory, Dee Dee Bridgewater, Diana Reeves, George Duke, Stanley Clarke, and many more.

Yes, Larry Dunn composed those dreamy, complex yet memorable chord progressions, laying the foundation that supported the melodies and deep lyrics. Dunn’s own composition, “Shining Star,” skyrocketed Earth, Wind, & Fire to worldwide fame and was the inspiration for many famous musical artists, including Stevie Wonder.

“Stevie Wonder actually showed up a couple of years ago at one of my concerts, came on stage and after performing at his request “Shining Star” with me. Stevie told the crowd the first time he heard “Shining Star” on the radio, he went to his keyboard and wrote his legendary song ‘I Wish!!!'” – Larry Dunn, Schmooze Jazz Magazine

Dunn’s brilliant writing, arranging, and producing set the tone for Earth, Wind & Fire.  And now, decades later, the Larry Dunn Orchestra (LDO) puts on the ultimate show with Larry Dunn’s Anthology of Earth, Wind & Fire. Past shows have had guest performances by Brian Culbertson, Stevie Wonder, Paulihno DeCosta, Ray Parker Jr., Ronnie Laws, Wayne Lindsey, and others. “You never know who’s going to show up and sit in on one of our performances.” States Larry.  As the composer many of the songs that catapulted the band to super stardom, including “Shining Star,” “Be Ever Wonderful,” “Jupiter,” and others. Each performance, LDO delights its audiences with “Reasons,” “Fantasy,” and “After the Love Is Gone,” his impressive list of accomplishments keeps growing.

“We’re excited because we get to see San Diego. I think the last time Luisa and I were down there was probably 25 years ago, believe it or not. I’m sure a lot has changed, but everybody says that of course it’s still gorgeous and beautiful. And the people are wonderful in that area. So, we’re really looking forward to it.” – Larry Dunn

Dunn helped transform Earth, Wind & Fire into one of the all-time most successful R&B bands in the world with sales of more than 100 million albums worldwide, 7 Grammy Awards, 13 Grammy nominations, 4 American Music Awards, 32 Gold & Platinum/Multi-Platinum Records & Albums. He also has a Star on Hollywood’s Walk of Fame, and has inductions into the Rock And Roll Hall of Fame (2000) & Songwriters Hall of Fame (2010). Larry Dunn recently received the Grammy Lifetime Achievement Award (2016), as well as other industry awards.  In addition to playing organ, synthesizer, piano, keyboards and clavinet with the group from 1972 until 1983, Larry held the position as the band’s musical director. In this key role, he contributed a great deal to the group’s international success. In addition, Larry rehearsed Earth, Wind & Fire for live stage performances and wrote many of the musical segues and medleys. Larry was a major creative influence in classics as “Shining Star,” “Spirit,” “Be Ever Wonderful,” “Runnin’,” “See The Light,” “Let Me Talk,” “And Love Goes On,” “Jupiter,” as well as other melodies that will live on in the hearts of fans and popular music lovers alike. Visit larrydunnmusic.com.