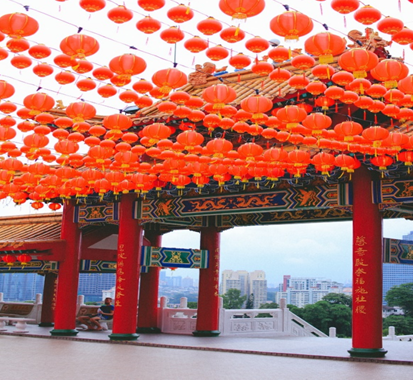 Malaysia is a dream destination for history buffs, intellectuals, and those who just want to be mesmerized by the undying elegance of the historical monuments.  Travelers can reach historical places in Malaysia through buses. You can now book bus tickets online at redBus. The stupendous beauty of the historical sites is only matched by the timeless cultural legacy of this peaceful country.

The fascinating Malaysian heritage is evident in a long list of historical landmarks spread across the Malaysian country and truly reflects Southeast Asia’s world heritage.

This breathtaking monument has its home in the historical city of Malacca. The palace is carved out of wooden pillars and comprises stunning pieces of architecture dating back to the 15th century. The structure is 5 stories high and situated at the foot of St Pauls’s Hill. The unrivaled testament to British and EuropeanarchitecturalcapabilitiesalsohousestheMelaka Stamp Museum, which boasts of a singular collection of 2000 stamps acquired from all the countries around the world. A cultural museum also showcases the royal splendor of Sultan Mansur Shah, who has greatly influenced the Malay Kingdom.

Also colloquially known as China Hill, this sober monument is the burial setting of the ancient Chinese of the region of Malacca. Nearly 20,000 ancient ancestors of the Malay China race were buried here. Located in a peaceful setting among the wild woods, this place is frequently visited by locals who use it for exercising and walking. Close by is the stunning Melaka River, famously known for its scenic beauty. Most travelers opine that a boat ride across the river is a stunning visual splendor.

Considered an ancient artifact found by Indian traders, the mosque was completely built with wood and later reinforced using bricks. The mosque lies on Goldsmith street, which has an exuberance of temples, churches, and mosques, thereby earning the epithet of Harmony Street. The mosque is a strong contender for World Heritage site status, as it showcases the beautiful blending of Malay, Arab, Chinese and Indian cultures. The mosque is distinctive compared to the monuments of its era as it houses a triple-tiered green pyramid and has some mystical writings that prophesize the future as per local traditions and folklore. The holy place can be visited only by wearing the robes offered to both men and women by the mosque’s administrators.

This structure is a testament to the Dravidian architecture and is regarded as a major tourist attraction mainly for travelers from India. This temple was founded in 1873. It comprises Raja Gopuram, and its 5 storied structure is home to 230 Hindu sculptures on its walls. The vibrant yet holy nature of the temple is believed to house the deity SriMahaMariamman-also knowns as the incarnation of Goddess Parvati-known for unleashing a protective layer across foreign people traveling in the land of Malaysia. Make sure to remove your footwear before entering the temple.

These robustfortresses are the historical remnant of European architecture. The name of the fortress means “The Famous,” as it has a distinction from being impregnable during the great wars fought in the land. But in 1511, the ownership of the fortress passed through the hands of the Dutch, Portuguese, and Britishers and assimilated the core values of all major religions. The historical site is famous for its resilience, courage, and mysticism and is world-famous as a symbol of resistance against foreign invaders.The nightlife around the A’Famosa fortress is legendary. The lanes are filled with street vendors selling their valuable trinkets as the night descends. The street food stalls are of the maximum culinary value, and tourists should not miss some of the great specials of Malay Cuisine.

Malaysia is a land where the best traditions of history have graced with their beauty, hope, and architectural splendor. A few other mentions, such as St George Church, Kyan Han Temple, and Snake Temple, are in order because of their historical significance. You can visit any of the above tourist places by booking a bus ticket online at RedBus.