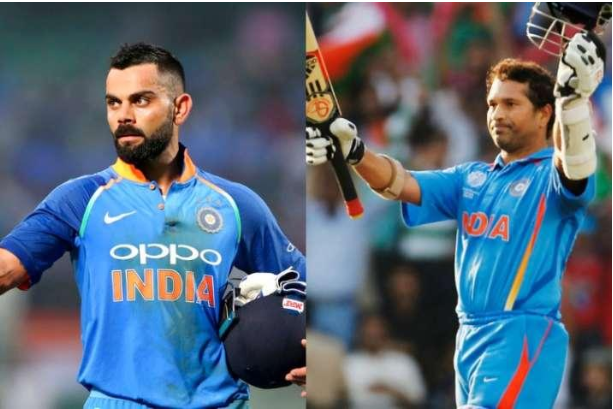 In cricket, Sachin Tendulkar and Virat Kohli are the two modern-day icons in the game of cricket, and the way the present Indian skipper building his innings, it’s become very much relevant to analyze him with his Idol Sachin Tendulkar in the one-day international cricket.

Both the connoisseurs of the Indian cricket team has reached to the 10000 runs milestones in a style, the Master Blaster Sachin Tendulkar scored astonishing 139 runs against Australia to reach the landmark and on the other hand, Virat Kohli scored thumping 157 runs against the West Indies side to reach the landmark, they are the only two players who reached to the milestones with a ton to their name.

Virat Kohli has achieved to reach the milestones of 10000 runs with fewer innings than Sachin Tendulkar, but though it is a good time to compare the current state of the former Indian great Sachin Tendulkar with the present Iconic batsman Virat Kohli.

If we look at the statistics of both the batsman’s we can decipher that to reach the milestone King Kohli took 205 innings in compare to Sachin Tendulkar’s 259 innings, also in terms of the average also the superstar leading the race against his idol Sachin Tendulkar, only his strike rate is relatively lower than the Master Blaster.

Based on the statistics we can easily say that who wins the comparison but things got bit unfair with the Master Blaster Sachin Tendulkar, in the present day scenario the One-day International matches are far more scoring in respective when Sachin Tendulkar used to play for the team, so actually to compare, the striker rates, average and all other things we need to take all the numbers into account and also need to measure the current scenario with the previous scenario.

Also, the average of the other batsman in the time of Sachin Tendulkar was around27.90 and now in the modern day it is 31.73, with these stats it is evident that Sachin Tendulkar exceeds the average striker rate with a higher margin than Virat Kohli, and in his time Sachin Tendulkar has also won more Man of the Match awards to his name in those innings and also another thing which we need to take into consideration is the factor of the teammates during the time frame.

The Master Blaster played his first 66 innings for the Indian national team as a middle-order batsman and in that period he did not have the force which he got while opening the batting line up, excluding those matches, the superstar in his rest all matches to reach the 10000 milestones has got far better striker rate than Virat Kohli and also his innings per century improves that his disciple Virat Kohli.

In the 1994-2001 Sachin Tendulkar’s stats in chasing were also pretty good, at that time frame he got the average of 50.28 with the strike rate of 94.65, in compare to Virat Kohli’s average of 68.54 with the striker rate of94.51, applying the same yardstick for the overall number, it is transparent that Sachin Tendulkar’s striker rate is better than Virat Kohli, but Virat Kohli’s greatest ability to score big runs and stay unbeaten, in his career till now Virat Kohli was unbeaten in 28 innings which helps him to have a higher average.

Virat Kohli has got the ability to play long innings with a decent strike rate, which increases his success percentage and this ability of his helps him to score then fastest 10000 runs in the modern-day cricket in ODI.

Sachin Tendulkar is the god of cricket with his monumental figures and for his scintillating performances he has put for the Men in Blues and on Virat Kohli is the King in the present Scenario with his outrageous batting ability and with his temperament, and both of them are best in their way for the Indian cricket fans and with the batting figures of Virat Kohli, we can say that Virat Kohli is the ideal successor of Sachin Tendulkar in the Indian national team and if anyone who can break the records of the Master Blaster than its only Virat Kohli who has got the potential to do so.