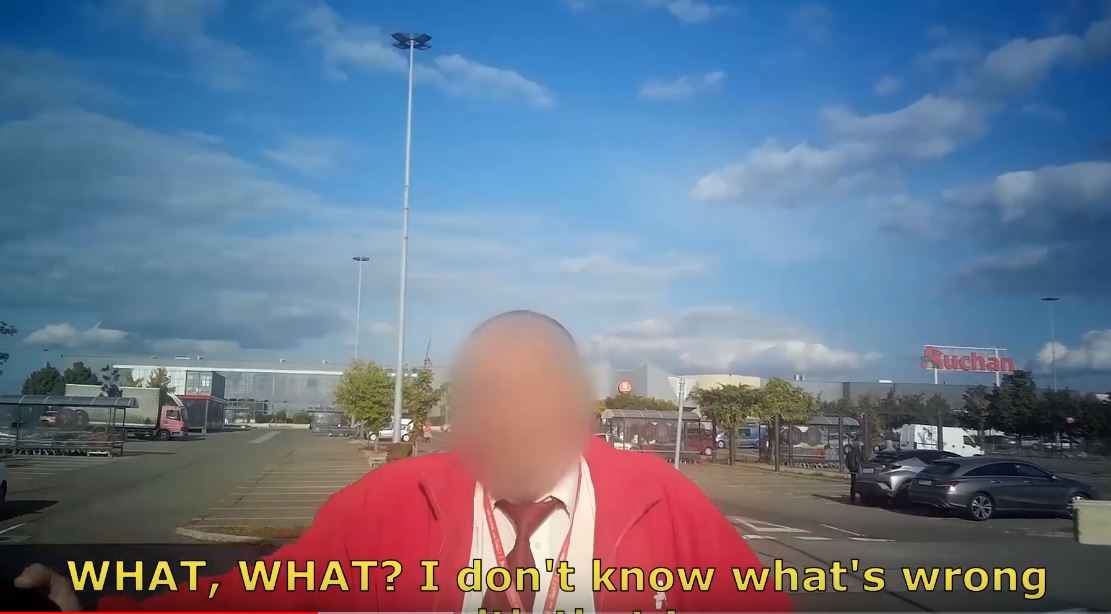 Mr.Wang from Hungary shared the following video with our portal about his worst experiences with Auchan Hypermarket.

In this year’s October, Mr. Wang went to an Auchan petrol station to fill his car, but accidentally he has pulled the petrol pump nozzle which fell to the ground. When he took his car to the cashier, Surprisingly, the cashier worker didn’t greet him and only after minutes a female colleague told him that somebody will come here to inspect the gas pump nozzle. He was ruled to stand aside.

After 15 minutes, a male Auchan colleague showed up with a cigarette in his hand and when Mr.Wang greeted him, this Auchan colleague in front of him threw the cigarette on the ground. And the Auchan worker has threatened Mr.Wang to sign a Minutes where he takes responsibility for the “damage”. Mr.Wang was shocked, as he said, he found no damage on the pump nozzle but he suddenly felt “himself in a jungle”. Meanwhile, the worker of Auchan keeps saying “Pay it! Pay it! And I let you go! Or I’ll call the Police!” Meanwhile, Mr.Wang tried to ask the worker about what is exactly he wants him to sign. Suddenly the Auchan worker went to brutal vulgar, at a point the worker straightly said to Mr. Wang that “You have Pulled that F***ing tape!”.  Mr.Wang even was ready to confront the Auchan’s worker physically and told him to calm down and do not speak vulgarly. But even later the same Auchan worker still said something similar: “I don’t give a sh*t” to Mr. Wang

See the video below:

Mr. Wang told our portal that after 30 minutes he was released from the Auchan petrol station. He has never experienced the same level of brutal aggressivity from an international company in his entire life. He reports this case to the Auchan of Hungary but as he said in their answer almost blamed him to received a treat like this.  As Mr.Wang claimed in Hungary, there are not too many international retail chains operate and after this sad event, he definitely won’t return to that Auchan store. Which means a sufficient lost for him and his family. In Hungary, only 2 main players in the hypermarket chain: Tesco and Auchan. As Mr. Wang said it’s hard for him because he has learned the World top 4. hardest language and even he tried to use formal Hungarian speak to communicate with an international company’s representative he received words started the “F” or “SH”. He added, he lives in a country where everything is about Christianity, meanwhile, an international company like Auchan in Hungary permits using vulgar words in front of a customer, what future he can expect from this country?  “This incident proves that if a country lets people abuse each other with no consequence, then that place will be not livable anymore. A multinational company should not let itself to be vulgar, or it must pay serious fines like 20000EUR or even 50000EUR. If a company like Auchan allows itself to behave like that then what will come next…?