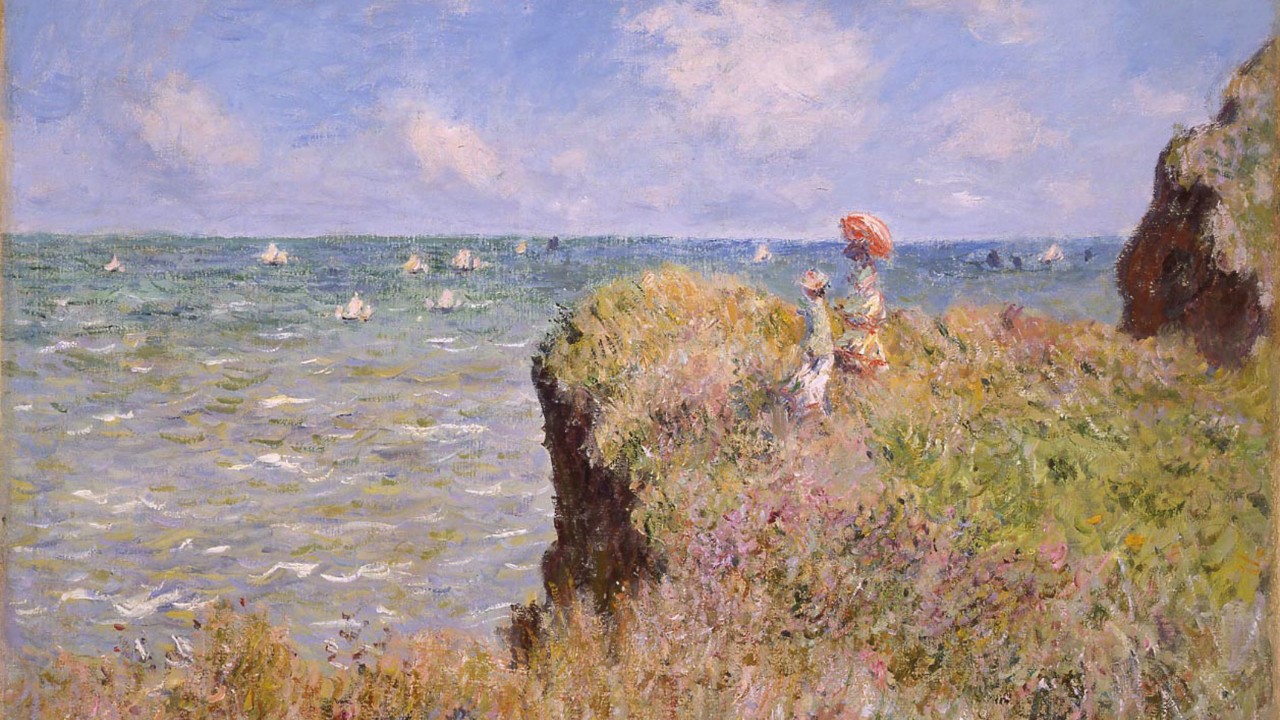 One of the biggest names of the Impressionist Movement is that of Claude Monet. He’s become well-known for his landscape paintings that had a flair for capturing light and the colors of the seasons. Any art lover’s home is incomplete without a Monet painting and these are seven that everyone should consider.

When it comes to landscape paintings, location can make things much more intimate. Irises In Monet’s Garden gives us just that with an artistic rendition of his very own garden, as the name suggests.

The painting heavily focuses on the purple of the flowers which really brings their vibrancy out. As they’re set against the reds, greens, and browns of the surrounding trees, they really get the chance to shine. However, with the faint addition of the blue water in the background and smaller plants in the treeline, the painting doesn’t risk becoming too singularly focused or dull.

2. The Walk Woman With a Parasol

Most of Monet’s work is focused on landscape design. He didn’t a large mix of subjects the same way artists like Van Gogh did. As such, it’s always special to see a piece where he’s taken on a slightly different style.

One of the few portrait-style paintings that Monet left behind was The Walk Woman With a Parasol. The painting features a woman and a young child standing side-by-side in a meadow. While still adhering to the unique Impressionist style rather than strict realism, Monet manages to give the two characters plenty of detail and emotion.

The Water Lily Pond, also commonly referred to simply as Japanese Bridge, is perhaps one of Monet’s most famous pieces. While the artist struggled financially for most of his life, he was able to buy some land of his own in the 1890s. It was the scenery of this land, Giverny, that inspired this iconic painting.

Interestingly, the inspiration in this area wasn’t singular either. Monet actually has a series of paintings inspired by the water lily pond. In the artwork, many call on the reflections in the pond itself as the biggest sign of technical mastery.

Boulevard Des Capucines is another landscape painting but it differs in that the viewer isn’t looking at a quiet, reflective piece of nature. Instead, the painting shows a busy, wintertime boulevard full of people roaming around.

It’s interesting to get to see such a concentrated population in a painting by an artist typically so focused on reverent natural scenes. It goes to showcase the range of skills that Monet had even if he didn’t focus on human subjects too terribly often.

If you want something that will add plenty of color to a room, there aren’t many paintings that use a color palette as diverse and vibrant as The Flowered Garden. The painting depicts a garden pathway lined with a variety of flowers and overhung with trees.

The colors in the painting come from multiple sources. Obviously, Monet had a lot of room to play with the foliage and flowers surrounding the path. What really brings the painting to life, though, is the artist’s attention to the light. This adds an extra dimension that brings a level of realism to the piece rather than leaving it in single-tone monotony.

6. A Cart On the Snow Covered Road With Saint Simeon Farm

It’s fairly common to see artistic pieces – among Monet’s work and otherwise – to focus on the beauty of blossoming nature. In Monet’s portfolio alone it’s common to see lush landscapes and blooming flowers. However, this only represents a part of what nature has to offer.

Particularly, not every artist takes the time to show viewers the beauty of winter which is often considered a more “barren” season. A Cart On the Snow Covered Road With Saint Simeon Farm gives viewers an image of a snow-covered winter wonderland rather than vibrant spring-time and summer-time locales.

7. The Artist’s Family In the Garden

Like his other masterpieces, this painting balances light and color in a nearly unmatched fashion. The family stands out since they wear contrasting colors to the grass and the plant life around them. They’re also highlighted by a patch of sunlight.

Monet has a library of gorgeous sand awe-inspiring works. These seven are just some of his best and most well-known but there is a much greater body of work to explore.