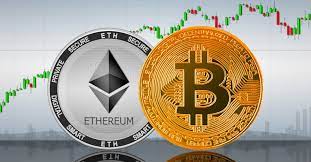 More than 20,000 cryptocurrencies have been created after the evolution of the first crypto in 2009 and a maximum of them are in circulation now. Interestingly, from the numerous coins found Bitcoin and Ethereum enjoy popularity like none other. Though bitcoin is known to be the most demanded one, according to Yahoo Finance, Ethereum may soon take place of Bitcoin which is the first of all the digital tokens to make its entry into the market. The entry at that time was not a very grand one because no one knew anything about it. But over the years, it picked up momentum, and now it’s a craze with the global community – be they from the new generations or the older generations.

But here we are out to discuss how you will measure Ethereum against Bitcoin. There has to be some common yardstick that you will use to determine which the better of the two is. But again it has to be noted here that no matter how much you weigh and measure them out, it will always remain an open-ended discussion because what may look bright to one does not have to necessarily look bright to the other and vice versa.

You must always get down to the history of things before you get to the root of the thing. And a bit of history makes an interesting read. So here is the history of Bitcoin. Bitcoin was released into the market in 2009 by its anonymous founder, Satoshi Nakamoto to battle the conventional financial system of fiat currencies. The Great Depression of 2008 made him come up with Bitcoins.

Ethereum was the brainchild of Vitalik Buterin, a researcher and programmer. It was released in 2015. And interestingly enough, he was working with Bitcoin when he released this coin to distribute applications and smart contracts.

Bitcoin has a Blockchain structure as its main network and functions as a fairly distributed ledger among its users. With Bitcoin, you can make peer-to-peer transactions wherein you can replace the fiat currency of a nation. It is the most vital advantage of it that it minus the problems associated with fiat currencies. The transaction fees that you incur here are minor and work in double the speed and time.

Herein we can say that Ethereum is a blockchain-based structure that works on the peer-to-peer platform but it has another added benefit. This platform allows you to make smart contracts and share various other applications. And if you ask what smart contracts are, they are applications that allow users to exchange and share anything that has value like shares, real estate, money, and so on.

Mining of Both the Coins:

Bitcoin mining uses the method of proof-of-work to corroborate a transaction. The same can be said for Ethereum. With this method, the miners solve very complicated mathematical puzzles known as hash puzzles where they compete with each other to be the first to do so. In that case, each gets a reward for their hard work. But the reward values of both are different. In recent times, bitcoin awards 6.25 Bitcoins whereas Ethereum awards 3 Ether to the miner for mining a single block.

But with modernization and more knowledge in the domain, Ethereum is moving further ahead by using the proof of stake method. This system allows miners to substantiate transactions based on the number of coins that he has ownership of. This means that the more coins you own the more powerful you become.

The difference in the Application of Both Coins:

Bitcoin was primarily designed to function as an alternative to the fiat currency in circulation and thus became a medium of exchange and store of value. Ethereum is an application in the form of a programmable blockchain used in areas like DeFi, NFTs, and smart contracts.

If you talk about the potential, Bitcoin rides the wave on a high on that aspect which Ethereum still has not managed to do so. However, invested after six years from bitcoin, Ethereum has improved so rapidly and both currencies are like competing with one another. But if you are a wise crypto investor and trader, you will diversify your portfolio and reach the top with both popular coins. For that, you can try using https://etehreumcode.app.