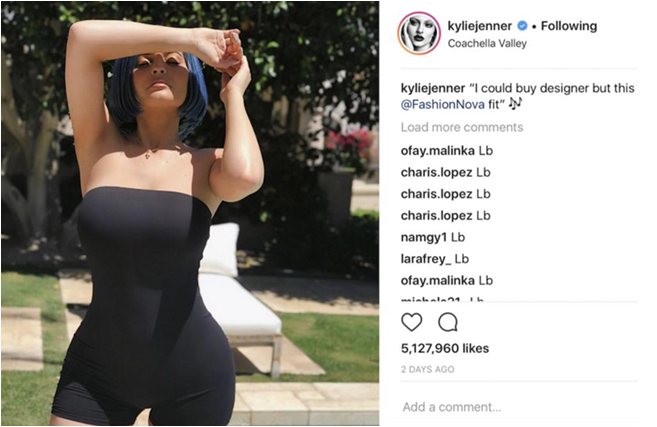 In only 7 years since the launch of its online store, Fashion Nova has been able to get 20 million followers on its Instagram account and millions of people shopping its products every month. One of the reasons this is possible is the very effective Instagram marketing the company has put in place from the beginning. Since its launch, the company has focused on Instagram, utilizing the fans of

celebrities, micro-, and macro-influencers to bring more people to shop on the site.

Influencers like Amber Rose, Blac Chyna, Baddie Winkle, and Kylie Jenner have all been seen wearing Fashion Nova pieces and convincing their fans to get them. Fashion Nova has over 5,000 influencers in their network. According to the founder and CEO, Richard Saghian, using influencers to market their products have a kind of ripple effect. He said the more people wear their products and shout them out, the more their fans also do the same. It’s like a viral Youtube video.

Fashion Nova has 5 brick-and-mortar stores in California, but most of its sales happen online. That’s where life is. As mentioned earlier, they have over 20 million followers on all their Instagram accounts.

In 2017, Richard Saghian said that three-quarters of the customers who purchase from the site return within 90 days. This is mostly because they ac re fans of influencers who are repeatedly rocking new and trending Fashion Nova styles.

Let’s take a look at how these Fashion Nova influencer partnerships made it one of the best fast-fashion brands today.

Fashion Nova Influencer Partnerships and the effect on the company

Fashion Nova works with over 5,000 different people asides from the #NovaBabes. They are one of the few brands that invest in micro-influencers rather than focusing only on influencers with a huge following.

Social media is a great place to showcase the company’s products because they don’t have to go through fashion editors to have photographs of their pieces displayed in magazines and other locations. With influencers and celebrities on social media, they can have a direct relationship with their consumers in real-time.

According to Saghian, rapper Cardi B has been wearing Fashion Nova pieces since she was just a micro-influencer with a few thousand followers. She continued wearing their pieces even as she rose in her music career, and helped generate millions of dollars for the company.

In one of the songs she sang on her album Invasion of Privacy, she mentioned Fashion Nova. This increased the number of people that went to search for the brand, with some purchasing some of the products.

In one of Cardi B’s viral videos, she was wearing a wristwatch worth $100,000 and then revealed that the dress she was wearing was $60. She said she is going to be on a budget until the day she dies.

By admitting that she too can wear affordable clothes without hiding it, she has instilled confidence in her fans. They can buy Fashion Nova pieces without being ashamed. Cardi said, “It’s not right for girls to pay that much money on clothes. They have enough problems as it is…”

In 2018, Cardi B took a step further with Fashion Nova by launching a collection with them. This was their first partnership with any celebrity. The collection contained over 80 pieces including outwears, pleather, and denim.

In less than 24 hours, the collection sold out.

A year later, Cardi B and Fashion Nova released a second collection. It had more pieces and styles than the first. She referred to it as the “season 2” of the first collection. Fashion Nova made over $1 million in less than 24 hours when the collection was released.

The reason why so many people bought the pieces in both collections is that they want to wear the same clothes as these top figures. And then, these clothes are pretty affordable. By pushing the brand to her followers, it is easier for them to embrace it than if they stumbled upon the brand without any influence.

This applies to other influencers and celebrities like Megan Thee Stallion who is also launching a collection with the brand in November 2020.

Fashion Nova makes it easy for influencers to reach them and join their network right from their website.

A nurse in Denmark, Mia Sand said she contacted Fashion Nova asking for an opportunity to advertise their clothes to her over 400k followers at the time. She said, “It is very hard to find good clothes for curvy girls in Scandinavia.”

Fashion Nova’s payment for influencers vary. While most are given free items, some of them receive between $500 and $2,000. Bigger influencers like Cardi B and Kylie Jenner receive up to $20,000 to rock Fashion Nova pieces for a month.

Fashion Nova has become one of the biggest international fast-fashion brands in a short time because they leveraged social media. Influencers made it possible for them to reach millions of potential customers every day. As these people see Fashion Nova pieces on these influencers, they follow their Instagram page and end up purchasing some of these items.

Another positive aspect of Fashion Nova is that they showcase #NovaBabes on their main Instagram page. As customers post pictures of themselves and use the right hashtags, they can also be featured on the page. This works for Fashion Nova because they are showing their products to their followers and this leads to more sales. In return, the #NovaBabes get more eyes on their page and even increase their following.