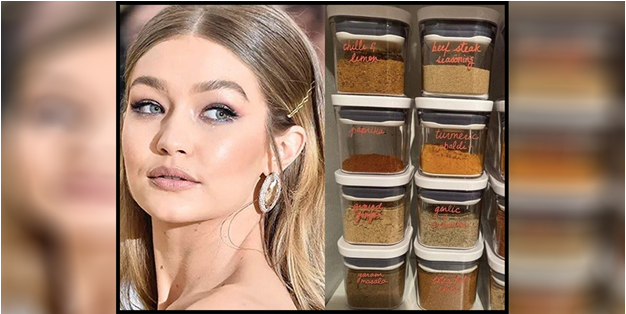 Popular fashion model and superstar Gigi Hadid has been in the eye of media outlets multiple times within the past year. She is commonly known for “breaking the internet” as her fans try to keep up with her spicy, happening life. First it was her pictures with boyfriend, ex-One Direction superstar Zayn Malik that broke the internet, followed by a pregnancy announcement that went viral and most recently, it is the use of a masala that has her South Asian fans going crazy!

When Gigi participated in the popular trend “post a picture of” on Instagram, she was asked to share a picture from the 15th of September. At first glance, it seemed like a random picture, until it wasn’t any more. The image depicted her various spice containers, each marked with a descriptive title and in the corner, hid a spice packet VERY familiar to us South Asians. It was none other than the Seekh Kabab mix from Shan Masala! Since then, Pakistani twitter has been flooding with posts about the update, all in admiration of the supermodel.

Many speculate that her introduction to the popular Shan Masala brand was from her British-Pakistani boyfriend Zayn Malik and his family. Some even said she was getting ready to make him some Ramadan favourites! Her neatly stacked spice rack contained tandoori masala, and on the side lay a packet of Shan’s Seekh Kabab seasoning mix, a staple in most Pakistani homes.

Although South Asian food is loved around the world, very few choose to make it at home due to its complexity. Luckily, Shan’s various spice blends make it very easy to recreate popular dishes right at home! Just take it from Gigi Hadid herself!