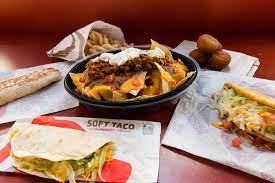 What do you mean you’re new to Taco Bell? What you need to do is to get to a local Taco Bell, and then order the following.

For many, this is the best that you can get at Taco Bell. Sure, it’s a simple food item. You can finish off one very quickly. It works as a snack, but when you get 3 of these, you have a meal.

This uncomplicated food item just about offers the quintessential Taco Bell experience. It offers everything you’d want in your fast-casual Mexican meal, and there’s no fuss. It’s basically like Joey Potter in Dawson’s Creek—great in every way, and super low-maintenance.

If you haven’t tried this yet, you sure are missing out. And once you’ve tried it, it won’t be surprising if it becomes one of your go-to Taco Bell orders.

This is just one of those pairings that made lots of people facepalm and ask themselves: “Why didn’t I think of that?” After all, why shouldn’t the taco be made with Doritos chips instead? Now you get something a lot tastier than plain ol’ taco shells.

This is proof that for every failed experiment with strange fast-food combinations, you get one that works.

You just pay $4.03 for Mexican Pizza, and you’re good to go. Never mind that the pizza purists howled at this concoction. Never mind that Taco Bell removed it from their menu back in 2020. If your local Taco bell is back to offering this, you just get it.

True, besides the fact that it’s round, it’s not exactly a pizza. Yes, you get meat and cheese, but this time you have plenty of crunchy items to back those ingredients up. And then you have fuego sauce and other sauces that just mix together nicely so you end up with this winner.

Never mind the philosophical debates and existential questions. Mexican Pizza from Taco Bell is terrific, and therefore you need it.

To understand this menu item, let’s first talk about the now-discontinued Nachos Supreme. This was a popular item, as the nachos came with just about everything you want.

All this leads up to the Grand Nachos Box, which for the moment is a limited release. It comes with:

In other words, this is Nachos BellGrande, but you get double the meat plus you get the guacamole. And what you have right there is a box of goodness.

But you shouldn’t. It’s surprisingly good. Once you try it, you’ll shake your head at the naysayers who aren’t impressed, simply because they haven’t tried it yet. But you know better now.

If you’re a vegetarian for whatever reason, then you probably despair at the dearth of fast-food options available for your strict dietary rules. The same goes for Taco Bell, but at least they off the Spicy Potato Soft Taco. It doesn’t have any meat in it, so it’s safe for vegetarians.

Meanwhile, if you’re not a vegetarian, try this anyway. It will satisfy your strange craving for French fries. But check first if it’s available. It was discontinued back in 2020, but it may just come back.

You may not get French fries at Taco Bell (at least that’s true right before the holiday season of 2021), but you can always get an order of Cinnamon Twists. It’s long been part of the Taco Bell permanent menu, and it probably won’t get cancelled. It’s just that good—you get the churro taste in small bites.

This is another disappeared menu item back in 2020, but many fans are hoping that it may reappear like Lazarus. It was a healthy option that came with:

For an additional cost, you can even opt for some meat, like steak or chicken. Either way, it was a true fiesta in a small bowl!